A mounting body of research is pointing to the significant promise of a little known supplement called Leucine. This essential amino acid has taken the fitness world by storm in recent times because of it’s potential to build or spare muscle, and even to burn more fat.

Just look at the research we’ve uncovered for you…

Adding Leucine to your post workout protein shake can increase it’s effectiveness by up to 16%. That may not turn you into an Olympic Champion in an instant, but it will make a big difference in your exercise efforts.

Researchers at the University of Maastricht in the Netherlands studied muscle protein build-up over a 6 hour period by taking muscle cell samples. They compared three supplementation regimes: a carb-only post workout concoction, carbs plus protein, and carbs with both protein and Leucine. The Leucine combo increased the efficiency of the post-workout drink by 16%.

Another 2005 study from Columbia University concluded that rats taking a Leucine supplement gained 25% less fat than rats that did not receive the supplement. And these guys were fed a high fat diet for 15 weeks! Granted, rats are rats and humans are humans, but this study certainly shows promise!

In 2006, Australian researchers from James Cook University demonstrated that Leucine supplementation increased the power and strength-endurance of rowers over a 6 week period. It could easily be extrapolated that Leucine supplementation in the general fitness population would allow you to workout harder for longer, thus getting better fat loss and muscle gain results.

Finally, even if you don’t do any exercise, it appears that Leucine can actually prevent muscle loss. Rats that had their legs immobilized in a splint were divided into a control group and a group that received Leucine. The Leucine group lost less muscle in their soleus (part of the calf muscle) and regained it more quickly after the splint came off.

So yeah, Leucine. It’s certainly no superhero serum. But if you’re serious about your training it’s hard to imagine why you wouldn’t try adding it to your supplementation routine.

How should you use it?

I’ve been experimenting with adding 5g to each of my post-workout shakes and I am noticing results. I am considering adding it to all meals. If you want to try that, make sure you’re eating at least 20g of protein at the same time. The research is pretty conclusive that Leucine’s effects only work in the presence of sufficient levels of amino acids (protein). 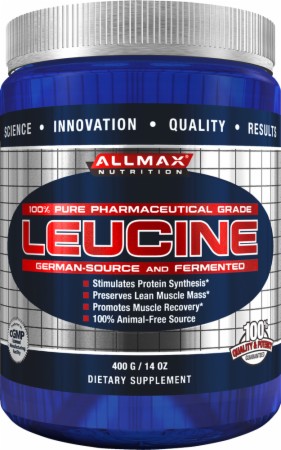 Switch to our mobile site